Jackson's has turned into the "I can do it...by MYSELF" kid already!  I was hoping his dependency would hang around alittle while longer...but he is a WHOPPING 3 years old now!  So grown up!  And if you are ready to be independent, buddy, then all that does it help your momma (and makes me sad at the same time...sniff, sniff)

I have been going back and forth about Jackson having a chore chart.  My "mommy brain" was telling me that he just wasn't there yet.  BUT...
we could always start with Morning Procedures!  If this works well, then we'll start with chores maybe this summer.  All this could do is make my life ALOT easy!

And if I can handle teaching morning procedures to first graders, this should be a piece of cake, right?
This is what I came up with! 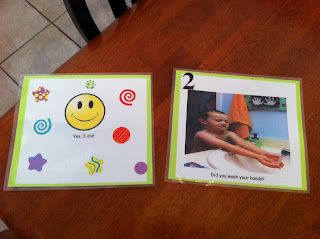 First, I took 4 pictures of him actually doing his "morning procedures" today!  1) Go Pee Pee 2)Wash your hands 3)Brush your teeth 4)Pick out clothes
(Four task/pictures, at this age, is a good number...not to many, not to little)

I printed the pictures and typed in a short question sentence at the bottom of each picture. "Did you wash your hands?"  (Because THAT'S the question I ask EVERY morning)

I stuck a number using scrapbooking stickers at the top of each picture to show sequence/ordinal numbers
(Math Lesson coming soon!)

On the back of each card is a smiley face and "Yes I did!" in text!  I added fun stickers just to make it look...well...fun and like an accomplishment!

Next step... LAMINATE and hang! 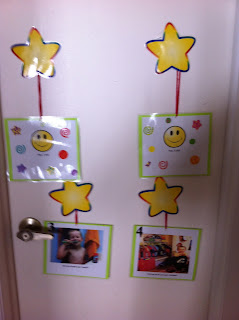 The idea: after every procedure is done, then he flips the picture over to show me "Yes I did!" it! 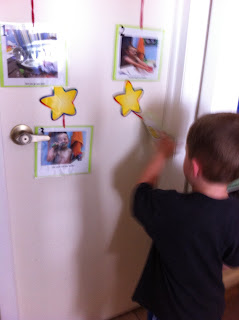 I just introduced this to him today (Sunday), but it officially starts tomorrow!  I'll let you know how it goes!

Happy Learning with your Little Learners!
at April 22, 2012 2 comments: 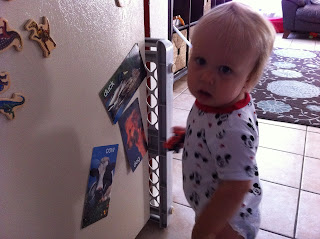 My littlest learner, Nixon, is really starting to understand language these days!  He can use it when he signs, when he wants something (using usually his pointing finger and a squeal) or when a certain "someone" messes with him (using his SCREAM!)

His first words were Momma (thank you very much!) and Elmo!  Yep, ELMO!  He has never seen an episode of Sesame Street or Elmo's World, but this boy has been to Busch Gardens just about every week for the past 6 months and Elmo is everywhere!  We even got a picture with that furry, red thing and his buddy Big Bird.  Being that it was the cutest picture EVER, it made the fridge!  But I never knew THAT picture being up there would help Nixon say his very first word!

Think about how many times you walk in and out of the kitchen as a mom?!  And I don't know about you, but I usually have a baby on my hip!  So EVERY time we would pass that fridge, I would stop, point and say names of people in THAT picture..."Elmo, Big Bird, Nixon, Jax and Addie (my niece)"  After about 4 days of this, Nixon started pointing and saying "Elmo".  Ta DA!  Who would have thought?  So....

...I pulled out these amazing animal cards, slapped a piece of magnetic tape on the back and put them on the fridge.  And EVERY time we walk to and from the kitchen, we stop and talk about the pictures.
Sometimes we talk about their sounds, maybe their colors, or the word/name/letters printed on the animal card.  Just talking to your child can be an amazing thing!  It's so cool the language (good and bad) that they can pick up from us!

Something SO simple has become SO effective!  The best confirmation that this lesson is working is when Nixon reads a book with Jer or I, he is pointing and saying animal sounds!  Yippy!  Happy Mommy/Daddy and a Happy Teacher!  Way to go, Nixon!

We have, now, added pictures of family members back in Texas.  I think I need a BIGGER refrigerator!

Happy Learning with your Littlest Learners!
at April 22, 2012 No comments:

M is for Monkeys, Money and Muffins! 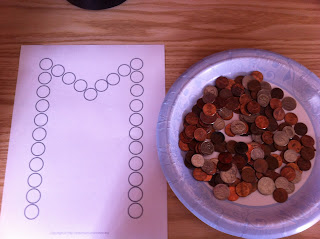 Nixon was turning 1 and his birthday theme was "Sock Monkeys"!  I'm thinking that is where Jackson got the idea for learning about monkeys...cute boy!  So off to the library we went and checked out every Curious George book they had.  I threw in a few non-fiction monkey books too.

Before this thematic unit, I had noticed Jackson had the letter N and letter M mixed up when he was asked to recognize them "out of context".  He knew Nixon's name began with the letter N, but would get confused if I asked him what "N" was by itself.  Boy Howdy, after these lessons we have no problem recognizing N and M!  Something must have clicked!

My first lesson (picture above) with Jax was a literacy/math combo lesson!  And it really helped with his small-motor skills as well.
Literacy Focus: Letter M; Sound
Math Focus: Sorting and patterns revisited - we had been doing sorting and patterns for about 6 months.  This was a mini-assessment to see if he really "got it".
Small Motor Skills - Money pick up, glue and stick in circles

I found this great website (http://totschool.shannons.org/) that has all the "Dot Marker" print outs.  I use these ALL the time!  We've used round stickers, money, fingerprints and yep...our Dot Markers.

After talking about the shape of the letter M and the sound that it makes, we sorted out our pennies from our dimes.  I started sorting them, then gradually handed over that job to Jax.  Before I knew it the whole bowl was sorted into 2 different piles.

He was still interested in the lesson, so I continued with my A(penny), B(dime) pattern assessment!  Once again, I showed him what I wanted him to do, then gradually "released" the responsibility to him.  Here are two, great videos of our lesson!
Jackson got an "A+" on this assignment and he proudly hung his "Money M" up on the fridge.  It only took 15 magnets because it was so heavy, but it was totally worth it!  A few weeks later, we picked off the money and put it into his piggy bank.

For our "Fun with Food" Friday lesson we made Muffins one week and then made Monkey Bread the next!  Friday's are our favorite days of the week...cooking for fun AND Daddy comes home from work for the weekend! 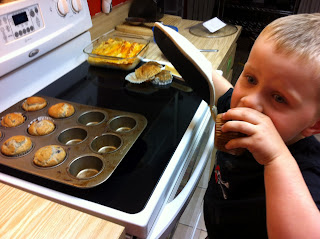 I actually NEVER played  the game "Barrel of Monkeys" until now!  Jackson, Nixon and I had LOTS of fun with this simple (and cheap Target $4.99) game!  We even used them on our Monkey Vines, later...

Another quick and fun Math lesson, was making Monkey Vines.  We decided to make 5 different vines and hang them shortest to longest.  Later (I didn't get a picture) we hung monkeys on them using the "Barrel of Monkeys" game pieces.  I just used a hole punch in the last green ring, and the monkeys hung from there.  I'd have to say, it turned out pretty, darn cute and Jackson was very proud of his Monkey Vines. 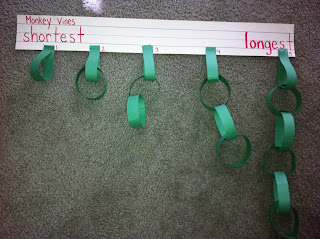 In another post on Making Books, I showed our "Where's JoJo?" book that we made.  Making this book was part of this thematic unit on Monkeys!

And the BEST part of our Monkey Theme was celebrating Nixon's First Birthday!

Happy Learning with your Little Ones!
at April 09, 2012 No comments:

Tips for Hitting the Road with Kids

Photo by Pixabay Family trips are a memory-making extravaganza filled with fun, excitement, and exhausted kids ready to ...